For details about speakers and schedule please visit the conference site.

Tickets are open till September 12nd, 2015. Reserve Your Ticket!

We look forward to seeing you in…

The Unexpected Outcomes Of Code&nbsp;Review

As modern software developers we have many tools at our disposal to help us feel confident that the code we produce is high-quality and defect free. Among the most valuable of these are tools that aid in inspecting source code written by another developer, or what we commonly call code review.

Often developers think the main reason for code review is to find bugs, but a 2013 study produced by by Alberto Bacchelli and Christian Bird of Microsoft Research concluded that other outcomes are more prevalent – and possibly more valuable!

Bacchelli and Bird surveyed 165 managers and 873 programmers at Microsoft, interviewed 17 developers with various degrees of experience and seniority across 16 separate product teams, and manually reviewed the content of 570 comments from Microsoft CodeFlow, an internal interactive tool that creates a central location where the discussion of code and the subsequent fixes can be discussed either in real-time or asynchronously.

What they found was that while the top motivation of developers, managers, and testers in performing code review is to find bugs, the outcome of most reviews is quite different. 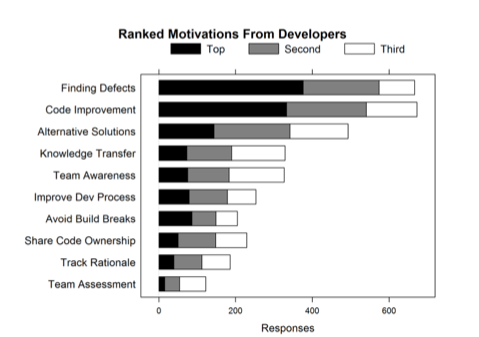 The ‘Motivations’ chart: the ranked motivation categories from the developer segment of the interviews.

The 'Outcomes’: Ranked categories extracted from a sampling of code review data.

As can be seen from these charts of Motivations and Outcomes, the top motivation for the largest number of developers was “Finding defects,” yet the topic most commonly discussed in code reviews ostensibly pertains to “code improvements:” comments or changes about code in terms of readability, commenting, consistency, dead code removal, etc.

So if code review isn’t giving us what we want, why do we keep doing it? The response of one senior developer in the study sums it up well:

“1 also has several beneficial influences: (1) makes people less protective about their code, (2) gives another person insight into the code, so there is (3) better sharing of information across the team, (4) helps support coding conventions on the team, and…(5) helps improve the overall process and quality of code.”

Bacchelli and Bird conclude that, while there’s a significant difference between the expectations and outcomes of code review, this isn’t a bad thing. While we don’t always get the exact value from code reviews that we expected, we often end up getting quite a bit more.

Turns out the Stones were right: You can’t always get what you want, but you just might find you get what you need.

In addition to a modicum of somewhat superficial bug fixes, teams get benefits such as “knowledge transfer, increased team awareness, and improved solutions to problems” from participating in modern code reviews. Additionally, the idea that code review is good at “educating new developers about code writing” is a compelling point.

They also recommend automating enforcement of team style and code conventions to free reviewers to look for deeper more subtle defects - something we agree with wholeheartedly!

All quotes and figures are from Alberto Bacchelli and Christian Bird, "Expectations, Outcomes, and Challenges of Modern Code Review”, May 2013, Proceedings of the International Conference on Software Engineering.

Now that the cat is out of the bag, I can share some recent news with you. Earlier today, we announced that Blue Box Group had acquired Rails Boxcar, our kickass deployment solution for Ruby on Rails applications.

Our team has been offering hosting services for over six years. When I made the decision to start providing Rails hosting over four years ago, it was something that I thought the community needed to validate that Ruby on Rails was a viable solution for building web applications. At the time, there was only one or two companies offering pre-configured solutions. The good ole days. :-)

Over the course of the past 4+ years, we’ve helped deploy and host well over a thousand web applications built with Ruby on Rails. Perhaps we even hosted your site at one point or another. We definitely had a lot of fun and learned a lot from our experience.

Fast-forward four years, the community now has several great solutions and options for hosting their Ruby on Rails applications. Knowing this, we began to look over the plethora of services that we offer and felt that we had been spreading ourselves too thinly. We were faced with the big question of: Should we focus our energy on trying to innovate in this competitive space or should we find a community-respected vendor to pass the torch to?

Rails Boxcar is a product that we are extremely proud of and believe the acquisition by Blue Box Group will be great for our existing customers. The acquisition is going to benefit our customers as they’ll be able to interface with a team with more resources. A team that also aims to innovate in this space and believes that Rails Boxcar will help them do that.

As a byproduct of this deal, our team has an opportunity to focus our collective energy on designing and developing web applications, which has also been a central part of what we do for as long as we’ve been in business. We plan to speed up our efforts on a handful web-based products that we’ve been internally developing and hope to release in the near future.

I had the pleasure of getting to talk thoroughly with the team at Blue Box Group and really feel like they’ll be able to focus their energy on maintaining and innovating within the Ruby on Rails hosting world.. definitely more than we could over the coming years. In the end, the acquisition is going to benefit our customers the most as they’ll be able to interface with a larger team that is innovating in this space.

If you’re interested in learning more about the acquisition, please read the press release.

From our perspective, this is a win-win-win situation for everyone involved. Expect to see some more news from us in the near future… and if you’re looking for a design and development team, don’t hesitate to get in touch with us.